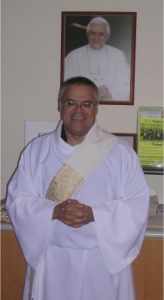 Rev. Harbey SantiagoPermanent Deacon
Deacon Harbey Santiago has been has been a parishioner since 1999 and was assigned to St Michael’s after his ordination in 2007. He also serves as Deacon for the Hispanic community of St John’s at Westminster.

He has worked for the Federal Government since 1985. In his spare time he likes to read, play chess, play classical guitar and evangelize on-line through Twitter, Facebook and his personal blog.

He is married to Nancy and has four children.